In which I arrive in America and start my adventure already... 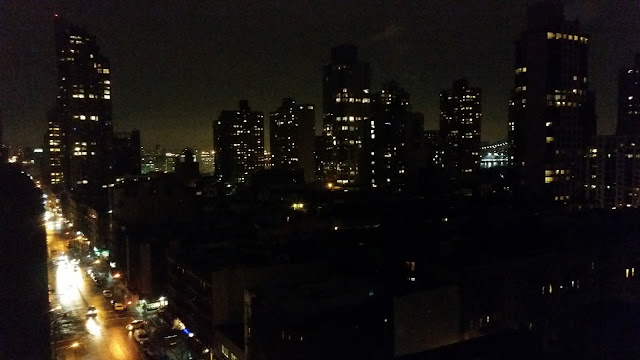 So I finally arrive in New York 30 hours after I left home and collect my suitcase from the carousel and walk out the door of the airport to find the public transport. I literally walk straight into a tall man in a suit waving a flimsy Uber sign who asks me if I want a ride. I tell him that I can't afford it, but he is very persistent and tells me he will charge $65 (he lied).

Anyway, I am a bit tired and there are so many people around that I think, what the heck? I may as well and so I literally walk off with the first strange man who talks to me. I'm pretty sure this wasn't exactly the best plan in the world, but there was no WIFI at the airport and it seems a good idea at the time.

Actually it turned out to be a great idea, Achmed was a great guy who pointed out all the buildings as we went along. I've seen the Empire State building all lit up in Christmas colours. I've seen the New York Times building. I've seen more Christmas lights than I have ever seen in my life.

I've been through three toll bridges. They seem to have to pay a lot of money to go on the roads here. I've been in a tunnel under the Hudson River. I saw a bunch of policemen just randomly hanging by the side of the road with the biggest, meanest guns just casually in their hands. I think it was went I saw the guns I realised I really was in New York.

Achmed decided I needed pizza, so he stopped and brought one. It was delicious. And then he dropped me off safely at the door to the building I'm staying in. The photo is the view from the balcony.

Anyway, all of that just on the trip from the Airport. What adventures can I have in two weeks??
Now I need a shower and a cup of tea.