Confessions of a Single Parent 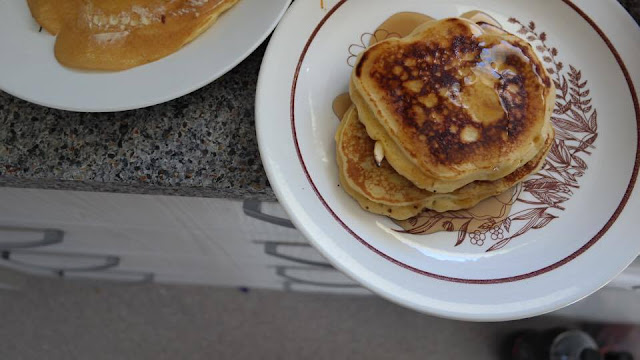 Last weekend I went to Auckland. I was lucky enough to have a talk with Simone about our unexpected lives, lives that never in our wildest dreams we thought we would ever be living. It was such a relief to talk to her. It made me realise that I have not one person in my every day life who is living the same life as me. Talking to Simone made me realise that I'm not failing, I'm just doing the best I can, the same as every other single parent out there. I don't believe anyone decides they want to parent by themselves, when we are growing up, each and every one of us have hopes of finding someone to share life with. 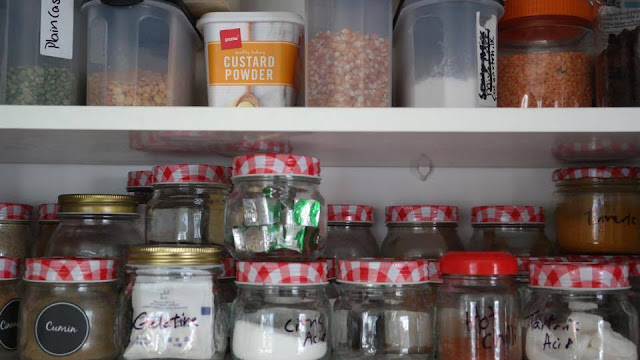 So doing it by yourself is frankly, a rude shock. Sometimes I see people on social media whose partner is away, tagging their photos #singleparenting. Let me tell you, that is NOTHING LIKE SINGLE PARENTING. (Yes those are shouty capitals). Single parenting is doing every single thing by yourself. Ugh. And then feeling like you are failing the whole time. Let me tell you, nobody judges me as badly as I do myself, I am constantly second guessing and hating myself for all my decisions. 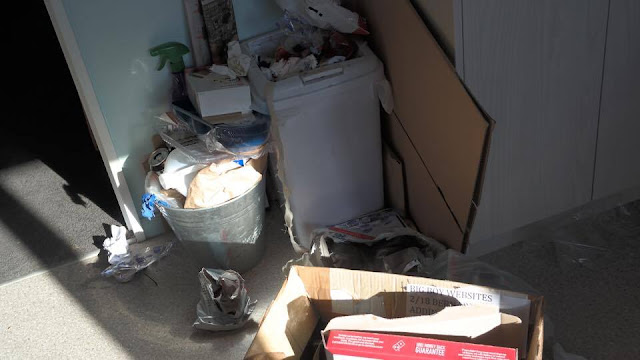 Being a single parent means that you do all of the parenting at your house. All of it. This is an actual photo of the rubbish and recycling situation in my kitchen right now. It is Annie's job and she has procrastinated all week. She's actually doing it right now because I promised to help her make donuts. Could I have done this job? absolutely! would it have been easier? Hell yes! honestly its a 2 minute job, if done each day.

But what would she learn?? She would learn that if I leave something long enough Mum will do it. So no, I won't do it for her. Am I doing it right? who knows?? not me that's for sure. I'm just trying to teach my kids how to be contributing members of society. 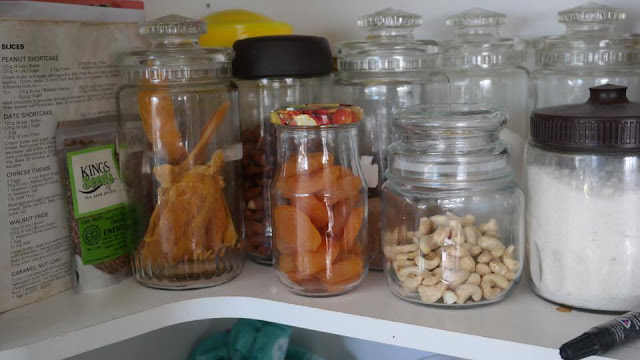 While I was away Mr W staying in our house and fed the animals for us. He also took it upon himself to completely clean and organise the room of the Resident Teen. It was amazing. I had been bleating on to the Resident Teen for weeks. That room smelt bad, and I kept saying it seemed like a homeless person lived there. I cannot tell you what a relief it was to have that done for us. It was incredible. Both the Resident Teen and I were amazed. We are now both working together to keep it better. Having Mr W do that meant that I didn't have to back down from my stand but gave grace to the Resident Teen to start again. I cannot tell you how grateful I am for some help and support. Hopefully Mr W is not scarred for life after that experience. I think he might be :( 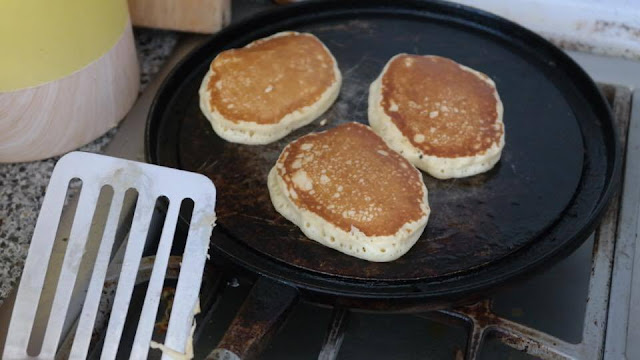 Last weekend I went away (as I mentioned). I went to Auckland to see a friend who is undergoing treatment for cancer. I chose to do that, instead of registering and warranting my car. Who knows when I'll get money to do that? maybe in about three weeks?? Goodness knows. See what I mean about decisions?? It's tough I tell you. But it was worth it to see my friend, you gotta do what is important. 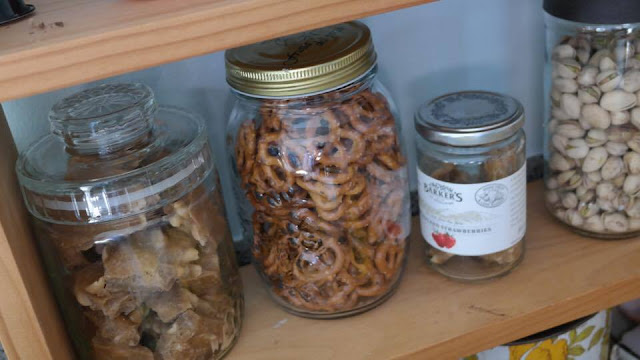 I've reconciled myself to the fact that clearly it's going to take a long time to dig myself out of this money hole. So a few months ago, I started buying random jars at the opshop for $1 or $2. Every week (no matter how tight money is) I buy at least one pantry ingredient. Finally it is starting to pay off. I have also started making treats from scratch. We always have homemade toffee now for an emergency sugar fix. We always have some nuts. We have popping corn so we can make pop corn. It's little things, but it is making a difference. We are possibly eating healthier now we make all our own treats. 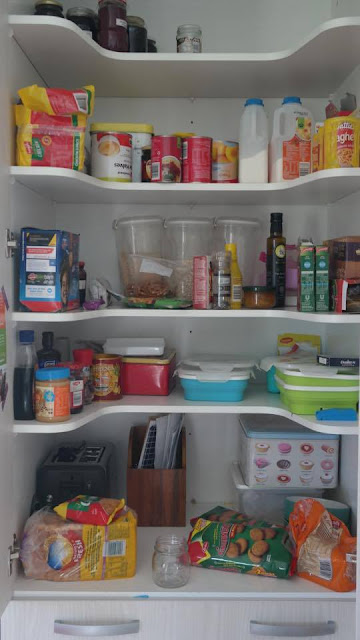 I sometimes joke that when this phase of my life is over (and I'm sure things will get better eventually), I never want to eat another sausage again. Ever. Ever, Ever. But in the meantime they are cheap and versatile and filling for the Resident Teen. Also (just by the way) why do the cheap foods have yellow and red packaging?? It's almost like they colour code food the cheap food!! don't get me wrong, we are super lucky. We have a nice home, I have a full time job, and we are mostly doing ok. Well we were going into debt fast, but we are going slower now. And yesterday I finally (two years later) paid of the arrears for school activities. It's the little things. 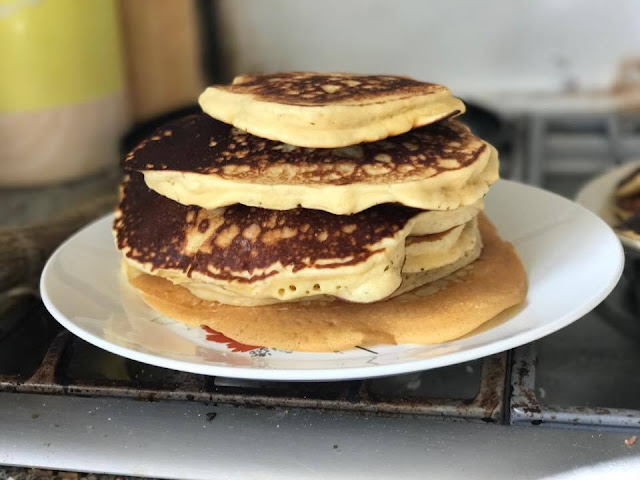 At least now when I do have some money, I mostly make good choices with it. It's taken a while, but slowly but surely I'm starting to feel like we might actually make it. The problem is, it is 100% up to me whether we do or not. Falling off the rails is so close at any point. For example this weekend I could just easily go back to bed and sleep, but if I clean the fridge, do the dishes, do 10 loads of laundry, vacuum the house, empty the rubbish, feed the chickens, make meals, make donuts with Miss 8, do the seven hours of work for my day job that I didn't do yesterday because the kids were sick, make the Resident Teen (who has a bad dose of the flu) some hot drinks and find some painkillers, bind three quilts, make the beds, do some baking for school lunches and cook the pumpkin that has started to go off sitting on the kitchen bench.... if i do that stuff, then next week will run smoothly.

That's what being a single parent is all about. It's relentless. And it's on repeat.
So don't judge me if I drink Coke Zero and don't exercise. Ok?